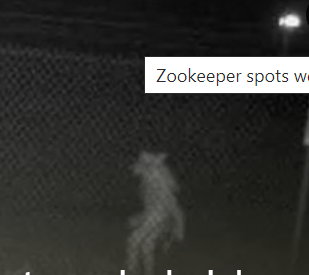 Everyone knows the internet loves a good mystery, which is why there’s been a plenty of amusing responses to the above photo on Reddit.

Everyone knows the internet loves a good mystery, which is why there’s been a plenty of amusing responses to the above photo on Reddit.

The image shows a strange, dog-like figure hanging around outside the perimeter fence of Amarillo Zoo in Texas.

‘It was posted in a private zookeeper Facebook group,’ the uploader, who uses the handle @Segu1n wrote in the thread.

‘The keeper said that they caught the image on a trail camera pointed at a perimeter fence and couldn’t figure out what it was.’

‘I believe it was pointed from inside the zoo at the perimeter fence.’

Related video: Yes, you can find a purebred dog at your local animal shelter or rescue

As always, the authenticity of the images remains in question – but that hasn’t stopped plenty of people suggesting ideas.

Suggestions range from Fantastic Mr. Fox himself to one of the werewolves from the classic 2002 sci-fi horror film Dog Soldiers.

Another Redditor pitched in with a more creative suggestion: ‘That’s a small child with a dead coyote skull on their head. If you look closely you can see the spatula used to skin said animal in small child’s left hand.’

The user responsbile for the snap clarified that the zookeepers hadn’t seen anything like this before on any of their automated cameras.

‘The OP’s other posts go back at least a year and are all just normal animal keeper type posts,’ Segu1n wrote.